Nicholas Culpeper and the Mystery of the Philosopher’s Stone

“Noble makes a case for Culpeper’s works, forgotten or otherwise, as knowledge for knowledge’s sake. The attention to detail and nuance with which Noble addresses the research serves only to highlight the validity of his work…”

“At the sound of his pleas, they turned to face him, their hands outstretched as if wishing to capture his every word” (Noble 2019, 165).

Renee Miller is a queer writer who holds a Bachelor of Arts in English and Creative Writing. In 2019, she completed Honours, her work was focused on looking at literature through the lens of queer and gender studies. Along with her passion for writing, Renee has always looked to explore and express ideas of gender, sex, and sexualities through visual art as well.

Chloe Bleakley is a burgeoning screenwriter currently undertaking post-graduate studies in film and television at the University of South Australia. Her writing interests include queer narratives, strong female characters, LGBTQIA+ found families, and sisterhood. Her recent Honours project was a television series chronicling the lives of a fictional group of LGBTQIA+ Australians in the aftermath of the 2017 postal survey. 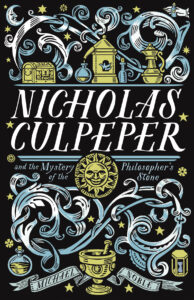 Nicholas Culpeper and the Mystery of the Philosopher’s Stone (2019) tells the story of the titular seventeenth century English alchemist who, in his time, caused controversy through his lifelong pursuit to uproot the monopoly the College of Physicians held over medicinal knowledge. At a time when such knowledge lay trapped behind barriers of language and classism, Culpeper made it his life’s work to pro

vide the common person with adequate and affordable medical treatment, all whilst attempting to mend a broken society in Reformation England. Dr Michael Noble’s posthumously published debut novella is a work of realist historical fiction, which explores the controversies and legacy of Culpeper, reimagining the details of his life, legacy and motivations lost to time.

Opening with a prologue, an ailing Nicholas Culpeper is visited by two men who encourage him to publish his unfinished manuscript that has been rumoured to contain a recipe for aurum potabile: an elixir for eternal life, more commonly known as the philosopher’s stone. Culpeper denies their request. Two years later, in 1656, Culpeper’s former colleague and friend, an established apothecary, Zachariah Jenkin, is called upon by a distant relative of Nicholas’, Sir William Culpeper. William challenges Zachariah to investigate claims that the aforementioned elixir is now in production, boasting of an affiliation with the late Nicholas’ name.

Following this, Zachariah partakes on a tumultuous quest, playing detective in an effort to uncover the truth about who authored the recipe for the alleged elixir of life and question those “sullying and besmirching the good name of Nicholas Culpeper”. Each chapter in the novella sees Zachariah interacting with a new player in the story, unearthing new truths with each acquaintance he meets. The search to find out if Culpeper’s work has been stolen or adapted for the financial gain by those once closest to him leads us and Zachariah to ponder who exactly Nicholas Culpeper was. What are the truths in his legacy? How has his legacy and life’s work been disrupted by his reputation and class? And ultimately, what drove this man to write? It becomes a question of solving the mystery of Culpeper himself just as much as it is about solving the mystery of the philosopher’s stone for Zachariah.

At times, the multitude of footnotes and corresponding research can feel overwhelming. Readers may feel like they are missing something if they haven’t digested and understood the entirety of the research as a whole. However, this speaks levels to Noble’s passion and deep, nuanced knowledge of the subject. If a lighter, more immersive and less research-heavy style of reading is for you, the footnotes don’t need to be read to appreciate the story Noble crafted but provides additional information if one chooses to indulge.

In his notes after the text, Noble explores why Culpeper’s work was forgotten and why much of society has forgotten him, lamenting on how a once admired mind ended up ignored and marginalised. Noble makes a case for Culpeper’s works, forgotten or otherwise, as knowledge for knowledge’s sake. The attention to detail and nuance with which Noble addresses the research serves only to highlight the validity of his work.

The poetic detail of the story world easily transports the reader to another place and time with vivid detail of stunning sceneries and evocative characterisation. Even the accents of background characters are such a small, minute element, but the care put into such details adds to the imaginary landscape. Thanks to some insider knowledge, this is a testament to Noble’s knowledge and skill, given that he never had the opportunity to travel overseas, and especially to the United Kingdom.

Though we did not have the pleasure to know Noble directly during his time earth side, this book comes across almost as a striking memoir—perhaps the ailing character of Nicholas Culpeper is a metaphor for Noble’s final struggles? Or perhaps Noble’s identity as intersex and fight for intersex recognition and knowledge about their struggles validated with the medical and legal professions is also metaphorical? Did Noble intend to entwine autobiographical elements to his written work? Or did he just relate to Nicholas Culpeper to such an extent that he felt obligated to tell his story? The similarities are there: Culpeper, a man shunned by society, even by his family and close acquaintances who were unable to understand his ‘radical’ ideals and beliefs. Just as it did for Nicholas, was this book Noble’s ‘key to salvation’? (187). Noble attempts to repair Culpeper’s legacy, in many ways making up for how history has shunned him through this empathetic and explorative work of fiction.

Noble may have been striving to do for academia what Nicholas Culpeper did for medicine; a demystifying of the academy, if you will. The book serves as something of an allegory for academia. In the same way that “the College of Physicians monopolises medical knowledge by locking it away in a foreign language” (79) and making necessary medical treatments inaccessible to certain classes of people. Likewise, some of Noble’s experiences were about being excluded from academic life with the claim that he wasn’t good enough to see himself as a scholar in his own right.

The legacy that Nicholas Culpeper leaves behind in aurum potabile is much like this book and we, the reader, are Zachariah, on one final mission from a legendary mind. For as much as this is the tale of Nicholas Culpeper, it is also the tale of Michael Noble. Just as Zachariah Jenkin is the seeker of Nicholas Culpeper’s secrets, we seek to uncover Noble’s. Nicholas Culpeper and the Mystery of the Philosopher’s Stone is a thrilling and illuminating work, sophistically written to bestow upon its readers the gift of knowledge from both the author and the titular character. In many ways the novella is a ponderance on legacy, and as such it is fitting that this work be a shining part of Dr Michael Noble’s.